Since Dr. Folkman hypothesized that controlling angiogenesis could be a feasible anti-tumor strategy, clinical oncology has seen an ever growing interest in angiogenesis inhibitors as anti-tumor agents. Because of anecdotal reports of clinical benefit for cancer patients after consumption of extracts from common bindweed (Convolvulus arvensis) by researchers from AIDAN Corporation, USA – we started to test various extracts of this plant for their anti-angiogenesis and immune stimulating effects. From 2001 until 2012, we continued to improve the extract process and combined the Convolvulus arvensis extract with extracts from Corydalis rhizome (Corydalis yanhusuo), Lycoris radiata and Patrinia heterophylla, which resulted in an even better efficacy.

The initial work of the AIDAN research team is best summarized in the following article, which describes the biological properties of the Convolvulus arvensis extract, as well as its clinical potential and possible side effect profile.

With permission of AIDAN Corporation:

Recruitment of new blood vessels plays a crucial role in tumor survival and growth. Several agents that act as angiogenesis inhibitors are currently being investigated as anti-tumor agents. Proteoglycan extract (PGM) was tested for anti-angiogenic, immunostimulatory, and anti-neoplastic activity. PGM is a non-toxic extract of the ubiquitous plant, Convolvulus arvensis. In the chicken egg chorio-allantoic membrane assay PGM inhibited new blood vessel growth in a dose-dependent manner. Results were 18, 55, and 73% inhibition at concentrations of 50, 100, and 200 mcg, respectively. PGM significantly inhibited tumor growth in the mouse fibro-sarcoma (S-180 Kun Ming 3-4 week old mixed male/female, 10 animals per group, 250-1000 mcg daily doses for 14 days), and mouse Lewis lung carcinoma (C57, 6 week old mixed male/female, 10 animals per group, 250-1000 mcg daily doses for 14 days) models. Inhibition (54-77% inhibition by weight compared to controls, up to 96.8% by cellular composition) occurred regardless of route of administration: intravenous; intraperitoneal; subcutaneous; and oral. PGM induced lymphocyte growth in a dose dependent manner. The ability of PGM-treated phagocytes to phagocytose yeast cells was 85% greater than controls. We conclude that PGM is a potent angiogenesis inhibitor that has immunostimulatory activity in vitro and anti-tumor activity in vivo and that PGM should be studied further as an anti-neoplastic agent.

Every aspect of tumor growth requires vascular growth.1 In 1971 Folkman hypothesized that controlling angiogenesis could be a feasible anti-tumor strategy.2 Recently the description of angiostatin and endostatin has resulted in increased interest in angiogenesis inhibitors as anti-tumor agents.3-6 Because of an anecdotal report of complete remission in a case of human ovarian carcinoma after consumption of an extract of the ubiquitous plant Convolvulus arvensis, we tested extracts of this plant for anti-angiogenesis and immune stimulating effects. Convolvulus arvensis is well known to contain toxic alkaloids. Therefore, in this study we examined a high molecular weight water extract of the plant that does not contain appreciable concentrations of alkaloids, which are depleted in the manufacturing process. The extract is primarily comprised of proteoglycan molecules and is herein referred to as PGM. In this study PGM was tested for angiogenesis inhibition on the chicken egg chorioallantoic membrane, for immune stimulating activity on human lymphocyte proliferation and human phagocyte activity, and for antitumor activity in mouse fibrosarcoma and mouse Lewis lung carcinoma models.

The aerial portions of Convolvulus arvensis were collected from land on which no pesticides or herbicides have been used for >15 years. The fresh raw material (194.25 grams) was blended for 5 minutes with 1250 ml deionized water H2O (6.44 ml/g) in a commercial blender. The mixture was then boiled for 30 minutes and allowed to cool. The boiled mixture was then filtered with a 100 micron sieve. The filtrate was centrifuged at 11,300 g for 15 min., at 4°C. The supernatant was then filtered sequentially through a 1.5 11m fiber glass filter and a 1.2 11m nylon filter. This filtrate was subsequently passed through a 30 kd YM-30 (Amicon) membrane. The retentate of that filtration is referred to as PGM.

1 day old fertilized chicken eggs (Groves Farms, McPherson, Kansas) were incubated for 10 days at 37°C. A 1 cm2 side window was cut in the egg shell to expose the chorio-allantoic membrane (CAM). A 3mm-diameter methylcellulose disc impregnated with either Heparin 10 µg (as an angiogenesis inducer), or Heparin 10 µg plus the agent was placed onto each of the CAMs. Six eggs were used for the control group and six for each of the treatment groups. The eggs were incubated for four more days, at which time the egg shell surrounding the window was peeled back, and 2-3 mL of dairy cream was injected under the CAM as a contrast agent. Each CAM was photographed, and scored for angiogenesis using a scale from 0 (no angiogenesis) to 4+ (highest concentration of new capillary growth).

Mixed gender Kun Ming mice 3-4 week of age, weighing 20-22 grams were bred and housed at Beijing Hepatitis Institute, Beijing, China. 0.2 mL of phosphate buffered saline (PBS) solution containing 8X105 S-180 murine sarcoma cells were injected subcutaneously in the left groin of each animal. The mice were randomly assigned to groups of 10. After 24 hours, either 0.1 mL of normal saline as a control, or 0.1 mL containing 500 µg of PGM dissolved in normal saline was injected subcutaneously in the right groin of each animal. The animals received treatment daily for 14 days, at which point the experiment was terminated. On days 9 and 14 two diameters of the subcutaneous tumors were measured by callipers. On day 14, the animals were sacrificed and tumors were resected and weighed.

INTRAVENOUS AND INTRAPERITONEAL AND ORAL

Studies were conducted as above except for route of administration and dosage. For the oral study, dosages of 125, 250, 500, and 1000 mcg were used.

Mixed gender C57 mice 6-8 week of age, weighing 20-22 grams were bred and housed at Beijing Hepatitis Institute, Beijing, China. 0.2 mL of PBS solution containing 1 X 105 Lewis lung carcinoma cells were injected subcutaneously in the left groin of each animal. The mice were randomly assigned to groups of 10. After 24 hours, either 0.1 mL of normal saline as a control, or 0.1 mL containing between 250 and 1000 µg of PGM dissolved in normal saline was injected subcutaneously in the right groin of each animal. The animals received treatment for 21 days, at which point the experiment was terminated. On day 21, the animals were sacrificed, and the tumors were resected and weighed.

Human lymphocytes were harvested using venepuncture, and subsequently isolated by use of a centrifuged density gradient. They were then incubated in a commercial lymphocyte culture medium (1 x 106 cells per ml) with and without added PGM (AIM V, containing interleukin 2 and 2 mercamptoethanol) in an atmosphere containing 95% air, 5% carbon dioxide, at 37°C, for 3 days. The lymphocytes were then counted using a Coulter Epics XL flow cytometer. A per cent increase in lymphocyte growth was obtained according to the following equation:

Two buffy-coat samples were prepared by centrifuging tubes containing anti- coagulated human blood from two subjects. The samples were then divided in two. To one buffy-coat from each subject, 2 micrograms PGM were added. One buffy-coat from each subject served as control. All samples were incubated for 5 hours. Then 30 milligrams of freshly rehydrated baker’s yeast was added to all samples. After one hour, a stock 2x solution of acridine orange stain was added to each sample. An aliquot of each sample was then placed on a microscope slide. The percentage of phagocytes (monocytes and polymorphonuclear cells) containing intracellular baker’s yeast from each sample was counted using a fluorescence microscope and recorded.

Angiogenesis was inhibited in a dose dependent manner by PGM. The results are summarized in Table 1. Images of two chorioallantoic membranes are shown in Figures 1 (control) and 2 (200 mcg/egg PGM). 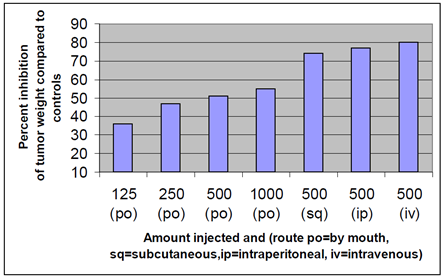 Figure 3 summarizes data for subcutaneous intravenous and intraperitoneal and oral PGM in the S-180 tumor model. Orally, PGM inhibited tumor growth in a dose dependent manner that did not achieve the same inhibition as the injected routes even at a higher dose (1000 mg/injection). p .01 for all subsets.

Lymphocytes proliferated in a dose-dependent manner to the PGM. The results are summarized in Table 2.

An average increase of 85% in the percentage of phagocytes containing intracellular baker’s yeast was seen in the treated samples compared to the controls.

This research was supported by and performed at the Bio Communications Research Institute, 3100 N. Hillside Ave. Wichita, KS 67219