TMAZ Zeolite is a finely powdered mineral supplement that Dr. Pfeifer adds to both his Prostate and Breast Protocols in cases where the protocols are not working and/or when he feels the patient needs additional help.

Please note: TMAZ is NOT absorbed into the body but does its work from the intestinal wall, before being expelled in the normal way. It is used in a similar way to bentonite clay. This makes it a very safe supplement to take.

What is Zeolite?
Zeolites are naturally occurring volcanic minerals which have formed over millions of years by the process of crystallization of volcanic ash submerged in the sea or fresh water lakes. Zeolites are mined through out the world and are used as common ingredients in Asian remedies. In addition, they have been extensively used in industrial applications to decontaminate soils contaminated with radiocaesium and radiostrontium. They are used as soil additives to reduce the uptake of mercury by plants and restrict the entry of mercury into the food chain and are also used to remove ammonia from drinking water. Zeolites are also potent natural detoxifiers, and were used to clear up radiation after Chernobyl.

What is the Chemical Structure of Zeolite?
The chemical form of zeolite is Al2SiO4. It is microporous, with a cage-like molecular structure to remove heavy metals and other toxins (in an ion exchange process) safely from the body.

(Please note that although zeolite contains aluminium, it is very strongly covalently bonded to the silicon and is not available to the body.) 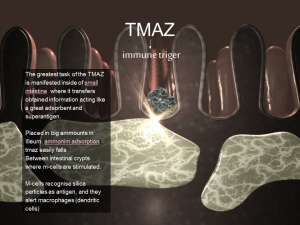 What is TMAZ?
TMAZ stands for Tribo Mechanically Activated Zeolite and is based on the alumosilicate volcanic mineral zeolite which has been tribomechanically activated via a special patented process, resulting in a powdered zeolite product. This process takes the raw volcanic zeolite mineral through a special micronization machine which grinds down the rock into tiny parties, greatly increasing its surface area and its biological effects, specifically increasing capacity of cation exchange and leading to much superior absorption and resistance to stomach acid. It is a completely safe, natural product.

What are the Ingredients of TMAZ?
100% zeolite (alumosilicate mineral)‏ which has been tribomechanically activated and milled.

What are the Biological Effects of TMAZ Zeolite?
TMAZ functions as an antioxidant, as a detoxifier, and an immunomodulator (a natural product that balances immune system function).

TMAZ has strong antoxidant capacity, this is because it traps free radical molecules via its cage-like structure, lowering free radials in the blood, as measured by Free Radicals Analysis System (FRAS).

In a study of 114 cancer patients, a mean blood antioxidant status was 1.23mmol/L. After 1 month of TMAZ there was a 42% increase in circulatory antioxidant levels. The Free Radical levels dropped by 26.5%.

Zeolite traps heavy metals by an ion-exchange process. It absorbs into the cage- like structure heavy metals such as lead, cadmium and mercury which are then excreted naturally. Thereby the metabolism of the liver and kidneys, pancreas and blood is enhanced. It is in fact a proven detoxifier in Europe, where it can be purchased for detoxification in pharmacies. Zeolite also helps buffer body pH to a healthy alkalinity, by extracting excess protons which cause acidity. A slightly alkaline body pH (7.35-7.45) is essential for good health and optimum immune function.

TMAZ functions as an immunomodulator, through its impact on the gut. When TMAZ reaches the intestines, its falls between the intestinal crypts which are highly vascularised and activates the immune system via the mucosal associated intestinal lymphoid tissue.

As a result it activates macrophages — these are cells that are first police guards in response to invaders, including tumour cells. It stimulates production of these cytokines, as well as stimulating CD4 cells, B cells, dentritic cells and even NK cell.

When does Pfeifer recommend taking TMAZ?
Professor Pfeifer incorporates TMAZ into the protocol with men who start failing his protocol, or who do not respond well to it initially. The men stay on the other components of the protocol.

He also recommends it to some of his female patients on his breast protocol for additional effectiveness.

What Dosage does Pfeifer use?
Professor Pfeifer gives a high dosage which is one heaped teaspoon (3g) 4-6 times per day in a glass of water 30 minutes before a meal.

Are there any Contra-Indications?
As TMAZ can stimulate immune function, it should not be taken with immuno-suppressants.

Is there any Research Data to Support TMAZ?
Professor Pfeifer has follow-up data on 15 patients, all of which had increasing PSA despite being on the protocol for a period of 12 months. All of the men had previously exhausted conventional means of treatment and exhibited clear evidence of disease progression, including PSA increase, when entering the pilot study. Eight patients responded with a stabilization of their PSA, while 7 continued to show rising PSA levels. There were no reported side-effects. These preliminary results showed about a PSA decline in about 70% of patients without any side effects. A prospective study of these compounds in a larger patient group is, however, still warranted, since there is presently no effective conventional therapy for hormone-refractory prostate cancer.

Important: This site is an information portal only; it should not be used for diagnostic or prescriptive purposes. If you are unwell or have a medical condition, please seek professional medical advice.