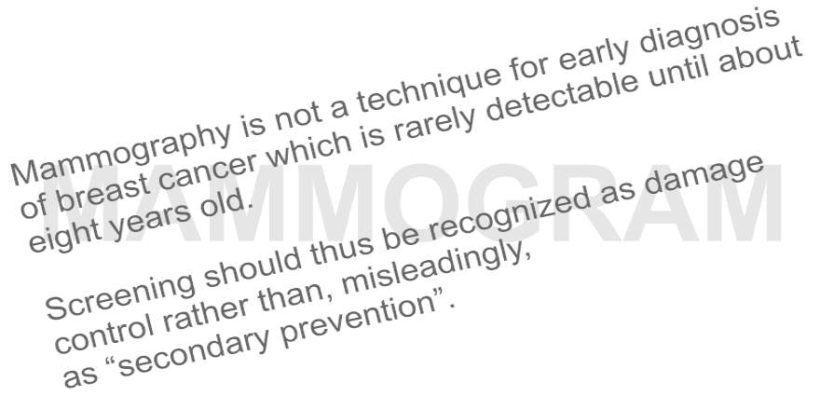 The following was released by Samuel S. Epstein, M.D., Chairman of the Cancer Prevention Coalition and Professor of Environmental and Occupational Medicine at University of Illinois School of Public Health, Chicago

The NBCC’s recommendations against premenopausal mammography will be confirmed and extended by leading epidemiologists at its tenth anniversary May 5-9 Washington, D.C. meeting. However, consideration should also be given to promoting the role of breast examination as an effective and safe alternative to screening.

Dr. Anthony Miller, co-investigator of the recent Canadian National Breast Cancer Screening Study, will report on a unique trial of some 39,000 postmenopausal women. Half performed monthly breast self examination (BSE) following instruction by trained nurses, had annual clinical breast examinations (CBE) by trained professionals, and also had annual mammograms. The other half practiced BSE and had annual CBE’s but no mammograms; it may be noted that CBE performance by trained nurses was as good, if not better, than the study surgeons.

As detailed in a review, in press in the International Journal of Health Services, by Dr. Samuel Epstein, Dr. Rosalie Bertell, and Barbara Seaman, reservations on the efficacy, besides hazards, of screening are further stressed by the following considerations:

Mammography is not a technique for early diagnosis of breast cancer which is rarely detectable until about eight years old. Screening should thus be recognized as damage control rather than, misleadingly, as “secondary prevention”.

Missed cancers are common in premenopausal women due to their dense breast structure, and also in postmenopausal women on estrogen replacement therapy who often develop breast densities, making their mammograms difficult to read. Also, about one third of all cancers, and more of the aggressive premenopausal cancers, are diagnosed between annual screenings. Women can thus be lulled into a false sense of security by an apparently negative mammogram.

Misdiagnosed cancers are common in premenopausal women, postmenopausal women on estrogen replacement therapy, and women with a strong family history, and can reach 100% over a decade’s screening. Misdiagnoses thus result in anxiety, more mammograms, unnecessary biopsies and even  mastectomies.

Overdiagnosis with subsequent overtreatment are among the major risks of mammography. With increased screening, pre-invasive breast duct cancer or ductal carcinoma-in-situ (DCIS), is now diagnosed in some 40,000 women annually and unnecessarily treated as invasive cancer by    lumpectomy plus radiation or even mastectomy. However, most DCIS never becomes invasive even if untreated, and mortality is low, 1%, whether diagnosed and treated early or late.

Screening poses cumulative cancer risks. Contrary to assurances that radiation exposure is trivial, the routine of taking four breast films results in 1 rad (radiation absorbed dose) exposure, in contrast to    about one thousandth less for a chest x-ray. The premenopausal breast is highly sensitive to radiation, each rad exposure increasing cancer risk by 1%, resulting in a cumulative 10% increased risk over 10 years screening; risks are greater for “baseline” screening at younger ages. Risks are even higher for silent carriers of the A-T gene, accounting for up to 20% of all cancers. Less recognized dangers are due to the often painful breast compression during premenopausal mammography. This may rupture blood vessels in or around small undetected cancers with resulting lethal spread of malignant cells.

Concerns on the unreliability, besides dangers, of premenopausal screening are so pervasive that this practice remains unique to the U.S.

Screening poses an inflationary threat; average Medicare and insurance costs are $70 and $125, respectively. If all 20 million premenopausal women had annual mammograms, minimal costs would be $2.5 billion. These costs would be quadrupled if the industry succeeds in replacing film machines, costing about $100,000, by digital machines, costing about $400,000, for which there is no evidence of improved effectiveness.

Breast examination, CBE combined with BSE, is effective, safe and low in cost in striking contrast with mammography. The American Cancer Society (ACS) admitted in 1985 that “at least 90% of the women who develop breast carcinoma discover the tumor themselves”. Nevertheless, the ACS, National Cancer Institute, American College of Radiology, and the mammography industry, all remain dismissive of breast examination. Claims for the benefits of mammography screening at all ages, in a non-peer reviewed ACS publication in the May issue of Cancer, are highly flawed including by “before-after” comparisons of women unstratified by menopausal status. National networks of CBE and BSE clinics staffed by trained nurses should be established. These clinics could further empower women by providing them with scientific information on breast cancer prevention of which women still remain largely unaware.