BioBran MGN–3 was developed ten years ago by Hiroaki Maeda, Director of Research and Development of Daiwa Pharmaceutical Co., Ltd in Tokyo, Japan. Maeda was primarily interested in finding solutions for human health and agriculture using natural phytonutrients. In the late eighties, Maeda focused on polysaccharides, which have been known to strengthen the immune system. In collaboration with Daiwa Pharmaceutical and led by Yasuo Ninomiya and Mamdooh Ghoneum, Professor of Immunology at Drew University of Medicine and Science in Los Angeles, Maeda developed complex short-chain polysaccharides (mainly arabinoxylan and other hemicelluloses) which he later named BioBran MGN-3. Small doses of this food-based mixture have been clinically proven to enhance immune response when ingested in vitamin form. The supplement is made by breaking down rice bran with enzymes from the shitake mushroom.

What is BioBran MGN-3 Arabinoxylan?

Certain large polysaccharide molecules – complex carbohydrates such as plant fibre – can stimulate the immune system. Research has shown that fibre in general can lower cholesterol, improve carbohydrate metabolism and reduce intestinal toxicity. While rice bran in general is known for its antiviral properties, certain mushroom fibres in particular have been known to enhance immune response. Unfortunately, plant fibres are largely indigestible, so these immune-enhancing benefits remain unutilised as the fibre simply passes through and out the body. However, once these very long polysaccharide molecules (specifically from rice bran) are broken down into much smaller particles called hemicelluloses – the most effective of which are known as arabinoxylan compounds – the advantages not only vastly increase, it also has an immediate effect on the body’s immune system. This is because the fibre now has a small enough molecular weight that it can be absorbed undigested into the bloodstream via the small intestines.

The leading manufacturer of this type of hemicellulose food supplement is Daiwa Pharmaceutical in Japan. They use a unique and patented process in which rice bran is broken down and partially hydrolysed using shitake mushroom enzymes (lentius edodes mycelia extract) to create a unique and natural mixture of hemicelluloses, the principle ingredient of which is the arabinoxylan compound or b-1, 4 xylophyronase hemicellulose. Although shitake mushroom enzymes are used in the process, no quantifiable amount of the mushroom can be found in the final product, so most people with mushroom intolerances do not experience an allergic reaction.

The resulting mixture of hemicelluloses from this process was generically called BioBran MGN-3. The three letters refer to the scientists that developed, researched and financed it: Maeda, Ghoneum and Ninomiya. It is also referred to as BioBran MGN-3 arabinoxylan compound because arabinoxylan is one of its main ingredients. As it is a mixture of natural ingredients (hemicelluloses), BioBran MGN-3 is categorized as a food supplement or ‘functional food’. Due to this array of natural ingredients, it is much easier for the body to absorb than single substances like conventional medicines. More importantly, this is thought to account for its lack of unwanted side-effects.

What is the effect on the body?

BioBran MGN-3 arabinoxylan can strengthen a weak immune more powerfully and safely than any other natural or synthetic product. Professor Ghoneum, Head of Immunology 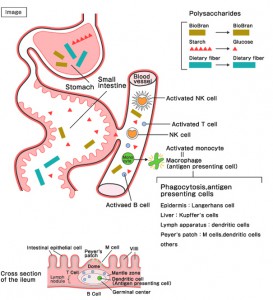 Research at Drew University of Medicine and Science, states that BioBran MGN-3 is actually the most potent immunnomodulator he has researched. Although no one knows exactly how it works, it is thought to enhance the production of natural cytokines in the body (substances such as interferons, interleukins and tumour necrosis factors). These not only help by directly destroying rogue cells and viruses, they also kick-start the immune system by increasing lymphocyte activity – B cells, T cells and particularly NK (natural killer) cells. B cells produce antibodies while T cells and NK cells float through the body destroying virally or bacterially infected cells and cancer cells. In its lifespan, one NK cell can kill up to 27 cancer cells by attaching itself to them and injecting them with deadly chemical granules which destroy the abnormal cell in less than 5 minutes.

The immune system is a collective army consisting of a trillion white blood cells, bone marrow, antibodies, cytokines and the thymus gland that help identify and destroy the millions of microbes (bacteria, viruses, parasites and fungi) that penetrate our body each day, as well as the thousands of our own cells that have become genetically abnormal or cancerous. The immune system is considered just as complex as the nervous system: it can produce a matching antibody for each of the millions of different infectious agents as well as remember how to reproduce those decades later.

When the body is under a great deal of stress or in a diseased state, the immune system can become overloaded and the activity of these protector cells can slow down. This is often compounded by medical treatments – such as chemotherapy in the case of cancer – which further weakens the immune system. A weakened immune system is less capable of preventing cancerous cells and infections from attacking and spreading throughout the Body.

It is very important to optimise the immune system and NK cell activity during disease prevention and treatment. As these cells comprise 15% of the body’s white blood cells, they are considered the ‘elite troops’ of the immune system and any rise in activity will greatly increase the chances of a rapid recovery. This is also why research on immunnomodulators often focus on this single parameter of NK cell activity – it is easy to measure in a laboratory using a 51 Cr-release assay and it gives a good indication or ‘snap shot’ of the overall health and strength of the immune system. Most research into BioBran MGN-3 therefore involves extensive testing on NK cell activity. BioBran MGN-3 intrigues physicians around the whole world because it not only stimulates NK cell activity with more than 300%, but also T cell and B cell activity with 250% and 200% respectively, without toxicity or other adverse side effects (unlike the synthetic cytokines currently being used by oncologists, such as interleukin-2 and other (toxic) substances).

Research has shown that, provided BioBran MGN-3 is regularly included in a healthy daily diet, stimulation of the immune system does not need to decrease over time. This lack of hypo-responsiveness with prolonged use is exceptionally rare in immunomodulatory substances and means that BioBran MGN-3 will remain effective with long-term use. NK cell activity usually peaks around 1 to 2 months on a high dose, after which it can be maintained at an adjusted dosage.

The ability to enhance the immune system makes BioBran MGN-3 an important food supplement in a variety of situations. Please note that most of the research has been conducted in relation to cancer and that more research must be conducted on viral infections, bacterial infections and Diabetes.

Even in healthy people, BioBran MGN-3 can strengthen the immune system by stimulating white blood cell activity, which in turn increases immunity and the body’s ability to fight infections and abnormal cells before they have a chance to spread.

BioBran MGN-3 increases survival chances by stimulating the activity of NK cells and promoting the rejection of abnormal cells. It also enhances quality of life for those on chemotherapy and hormone therapy due to its ability to alleviate the side effects of medications used during these treatments (e.g. as nausea or hair loss). Cancers of the blood, such as leukaemia or multiple myeloma, show the best benefits and good results have also been seen in other forms of cancer such as lymphoma, ovarian, prostate and breast cancer.

It is important to note that MGN-3 is best used in combination with conventional cancer treatments such as chemotherapy or surgery. These treatments drastically reduce the number of cancer cells in the body while BioBran MGN-3 helps the body destroy or manage the rest. Most of the research into the benefits of BioBran MGN-3 arabinoxylan on cancer has been conducted in conjunction with conventional cancer Treatments.

BioBran MGN-3 has the ability to improve the immunological parameters in patients with HIV, AIDS and Hepatitis B and C (Interferon-Gamma production, GOT, GPT and Gamma GPT). Laboratory research has revealed that it can inhibit the replication of the HIV virus without toxicity. Once again, BioBran MGN-3 must be used in conjunction with conventional therapies.

BioBran MGN-3 has the ability to lower blood sugar levels, although it is not a replacement for insulin or glucose monitoring. Further research is certainly needed in this area.

Is all this supported by clinical trials?

The main researcher of BioBran MGN-3 is and remains Dr Mamdooh Ghoneum, a professor at the Department of Immunology at Drew University of Medicine and Science in the United States. The doctor is now an internationally renowned authority in the field of cancer immunology therapy received a PhD from the University of Tokyo in radioimmunology and completed his postdoctoral work in immunology at UCLA. Over the past twenty years he has researched various substances that can enhance the immune system, but says that BioBran MGN-3 is the most effective immune complex he has ever tested. He was so impressed with the results that he devoted all of his research efforts to treatments using this compound.

Although research on the immune response to BioBran MGN-3 arabinoxylan has been positive for diseases ranging from cancer and diabetes to viral infections such as AIDS and Hepatitis B and C, there is clearly a need for larger scale clinical in vitro research, including double-blind trials, to determine exactly how an increase in immune response (particularly NK cell activity) can be translated into clear recovery and survival statistics for the aforementioned disease. More tests are being planned around whole world and any new results will appear in the news section.

Does BioBran MGN-3 have any toxicity or side-effects?

No. BioBran MGN-3 arabinoxylan is a natural product with no adverse or toxic side-effects; this has been verified by blood tests and research into liver and kidney function in people that have taken high doses of this substance over several months.

Although mushroom enzymes are used during production, no mushroom content can be found in the final product, which means that most people with a mushroom allergy can take this supplement without experiencing an allergic reaction. This substance has been authorized by the Japanese Health Food and Nutrition Food Association and has passed a strict evaluation under the supervision of the Ministry of Health and Welfare.

How much BioBran MGN-3 should I take and when?

Because the body does not build up resistance to BioBran MGN-3 over time, this food supplement can be taken safely and effectively for a prolonged period.

Most research into BioBran MGN-3 was conducted using 30to 45mg/kg/day in separate doses taken with meals and can ultimately be maintained at a dose of 15mg/kg/day. Dr Ghoneum recommends a dosage of at least 500mg per day to maintain good health. For diabetes, hepatitis B, hepatitis C and other infections he recommends a dose of 1000mg per day. For cancer and AIDS he recommends 3grams per day for one month and then 1gram per day. BioBran must always be taken after meals (preferably 30 minutes later) while larger daily intakes must be divided into three portions and taken after breakfast, lunch and dinner. If the person taking the supplement is very ill, the dose can be maintained at 3 grams per day for an extended period.

In order to maintain good health, we always recommend you inform your doctor that you are taking this supplement so he or she can integrate it into your treatment plan. As previously mentioned, BioBran MGN-3 is very effective for late-stage cancers when used in conjunction with conventional treatments such as surgery and/or chemotherapy (during which most of the tumour was removed) while increased NK cell activity maintains the rest.