Biocurcumin BCM95® is a patented extract made from turmeric, which possesses a number of biological attributes, such as antioxidant, anti-inflammatory, antibacterial, and anti-rheumatic effects, as well as a significant anti-cancer effect. In contrast to normal turmeric extract, Biocurcumin BCM95 possesses an extremely high bioavailability (about seven times as great). That means that an oral dosage of only 250 mg of Biocurcumin BCM95 achieve approximately the same blood-drug level as a dosage of 1,500 mg of normal turmeric extract, or about 37,500 mg of simple Curcumin Powder. Therefore, taking Biocurcumin BCM95 quickly delivers a therapeutic concentration of curcuminoids into the blood stream.

Der Biocurcumin BCM95® distinguishes itself with the following positive properties: 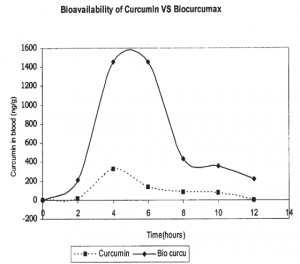 From a medical standpoint, the antioxidant, anticarcinogenic, and inflammatory reducing properties of the turmeric extract are of particular interest. These properties are used in the treatment of various diseases, such as intestinal, lung, and liver diseases, and with inflammatory diseases, Alzheimer’s, heart attacks, and cancer illnesses. Clinical tests and studies conducted on animals confirm in particular the cancer-reducing property in the treatment of stomach, intestinal, liver, and skin cancer. Using curcumin can considerably reduce even advanced metastasis development.

antioxidant, anti-inflammatory, and anti-cancer properties and which belongs to the category of polyphenols. Diverse clinical studies and animal tests with resveratrol demonstrate the positive effects of this substance on Alzheimer’s, arthritic cancer, autoimmune diseases, arteriosclerosis, and cardiovascular diseases, among other illnesses. Polyphenols are also known for their high redox potential, which makes them ideal free-radical inceptors.

It is said that resveratrol, like coenzyme Q10, directly seals the mitochondrial membrane of the so-called proton leaks and neutralizes reactive oxygen-based free radicals. Moreover, resveratrol has the capacity to stimulate the body’s own various antioxidant enzyme systems (for example, the superoxide dismutase and its own catalases).   In addition, resveratrol prevents lipid peroxidation, namely the oxidation of LDL cholesterol, which in its oxidized form can be stored in the vascular wall and prepare the way for the development of arteriosclerosis. Resveratrol prevents this process and therefore counteracts the calcification of the blood vessels. Moreover, a significant neuron-protective effect is attributed to resveratrol, so that it is hoped that it can also one day be used in the treatment of Alzheimer patients.

The positive effects of resveratrol on the most diverse disorders can also be partially explained by its significant anti-inflammatory effects. This allows resveratrol to reduce two enzyme systems in the body at the same time, namely the Cyclooxygenase 2 and the intricate nitrogen monoxide synthetase, both of which play an essential role in inflammatory reaction. In the last few years, a number of studies have shown that in particular chronic inflammation is extremely important for the pathogenesis of many diseases, from the development of arteriosclerosis to neuronal degeneration to the formation of cancer. As early as in the 90‘s, it was demonstrated that resveratrol possesses an anti-cancer effect at all three levels of the disease: it prevents cancer, reduces its growth, and reduces metastasis. These effects of resveratrol are based upon the ability to send the already existing cancer cells into programmed cell death (apoptosis) and to increase the effectiveness of the toxic cellular effects of conventional chemotherapy or radiation. These characteristics could increase the effectiveness of such treatments and counteract therapy resistance, which is often observed.

Quercetin is also extracted from the so-called secondary plant matter (flavonoid) Polygonum cuspidatum. This substance has impressive antioxidant, anti-inflammatory, and immune-modulatory effects and regulates the cell cycle. Quercetin is virtually non-toxic when taken orally or intravenously. Studies from the famous Mayo Clinic and the Dana Farber Cancer Institute at Harvard University in the USA have shown that Quercetin blocks the growth of androgen-sensitive and hormone-resistant prostate cancer cells, making them sensitive to heat; the substance is therefore suitable to support hyperthermia treatments. Quercetin is, however, not only applicable as a treatment and prevention substance in prostate cancer. It is also applicable in conjunction with breast cancer, colon cancer, lung cancer, and several other types of cancer.